Tabuaeran, also known as Fanning Island, is an atoll that is one of the Line Islands of the central Pacific Ocean. It was purchased in 1983 by Kiribati which sent settlers to the island to relieve overcrowding elsewhere in the country.

The land area of Tabuaeran is 33.73 square kilometres, and the population in 2015 was 2315. The maximum elevation is about 3m above high tide. The lagoon has an area of 110 square kilometres.

The University of Auckland Library holds the following document in its collection:

Application for license to install & use a wireless station at Fanning Is. for experimental purposes. From : K. Paice, Esq. No : Date : 21st May, 1926

I have not examined this document, nor do I have any other details about a radio station on Fanning Island. 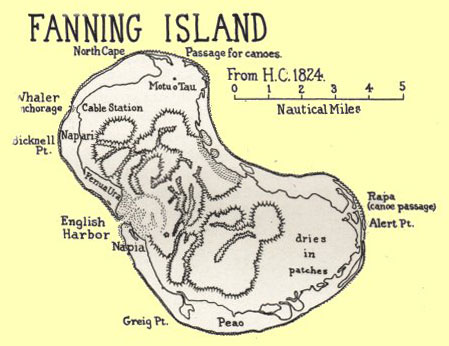 Tabuaeran hosted a station on the Canada-to-Australia section of the All Red Line telegraph cable system, beginning in 1902. Fanning Island Post Office opened on 29 November 1902. During World War I, the cable station was visited in September 1914 by the German Navy light cruiser SMS Nürnberg and was severely damaged when a landing force went ashore to put the station out of action.

If you have information about radio on Tabuaeran, please contact the editor.