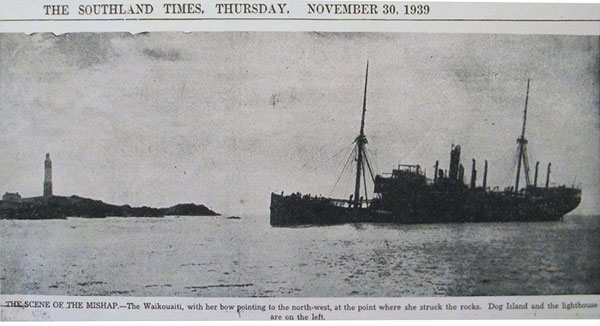 The Union Steam Ship Company steamer Waikouaiti ran aground in calm seas at Dog Island in Foveaux Strait on 28 November 1939. All the crew were rescued, but the 3926-ton ship broke up.

Although there is a lighthouse on Dog Island, the crew of Waikouiti could not see it due to thick fog.

The ship’s master chose to proceed at full speed despite having virtually no visibility. A court of enquiry found that he had committed an error of judgment but allowed him to keep his master’s licence.

A Southland Times report, the day after the grounding, includes:

The first word that something was wrong was contained in a wireless message from the master, Captain J. Bruce, to the harbour master at Bluff, Captain NW Haszard, who happened to be on his way back from Dunedin at the time. The message was passed on to the board’s secretary, Mr RN Porter. Captain Haszard arrived at Bluff just after the harbour board’s launch had set out to look for the Waikouaiti and the launch was recalled by morse signal.

By 1 am the stranded ship had evidently been located and Captain Haszard was aboard, as a message was received from him by Mr Porter to send for the tug Awarua…

…About 2.10 a.m. a wireless message was received from Captain Haszard by Mr Porter cancelling his previous message asking for the despatch of a tug from Port Chalmers.

While steaming through fog towards the end of a voyage from Sydney to New Zealand ports, the Union Steam Ship Company’s 3926-ton steamer Waikouaiti went aground on Dog Island, near Bluff, at about 9.30 o’clock last night, and is still hard and fast. The crew and the mails are safe.

The Waikouaiti, under the command of Captain J Bruce, was bound from Sydney with 5500 tons of general cargo from New South Wales for discharge at Lyttelton, Timaru, and Dunedin.

Fortunately, the sea was calm when she went aground, but a slight swell caused the ship to grind, and during the night. she took a considerable quantity of water into No. 1 and No. 2 holds. The prospects of refloating the vessel, in view of the quantity of water shipped, are considered unpromising.

According to a Press Association message from Invercargill, the vessel struck rocks 150 yards off Dog Island. The forepart is seven feet under water at high tide, while the stern is high in the air with the propellers showing. The ship will probably be a total loss, but her cargo of hardwood poles, sleepers, and steel from Port Kembla and Newcastle will probably be salvaged by the Gale and Waitaki, which are scheduled to arrive at Bluff this afternoon. The crew of 25 took to the lifeboats with their personal effects, and were towed to Bluff by a Harbour Board launch, arriving at 9 this morning.

Captain King, marine superintendent of the Union Company at Dunedin, and other officials left Bluff in a launch at 11 o’clock this morning to make an inspection. The weather is fine and the sea calm.

Salvage will present no great difficulty if the sea remains calm, but the ship will be in a precarious position if it comes up rough.

Dog Island, where the vessel struck, is three miles from Bluff. It is half a mile long and a quarter of a mile wide. On the highest point, which-is 50 feet above sea level, is a lighthouse tower, which is 150 feet high. Only keepers and their families live there.

The first officer of the Waikouaiti is Mr SC Angus, the second Mr CA Spencer, and the third Mr JW Wilson.

The Waikouaiti was built in Germany in 1914 and named Irmgard. She was taken over after the war by the Union Company and became a familiar vessel in the coastal and intercolonial trade, chiefly between Sydney and Newcastle and South Island ports.