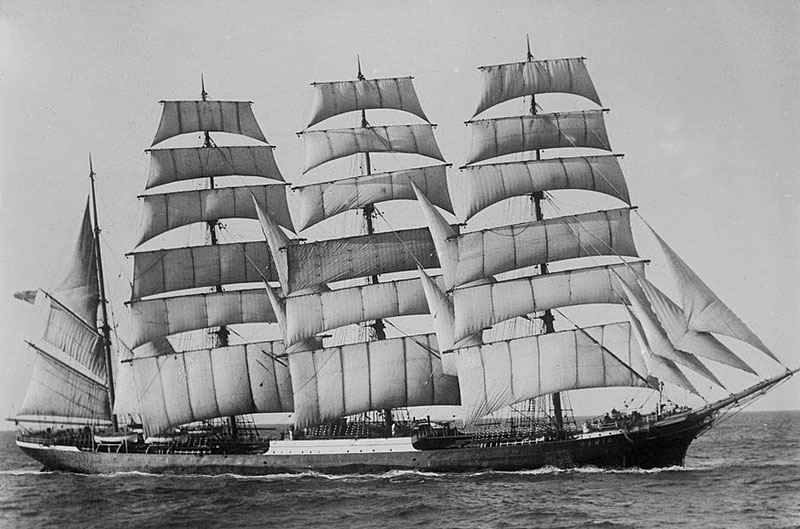 On the 3rd August 1941 the Finnish barque Pamir was seized by the New Zealand government, which regarded Finland as ‘territory in enemy occupation’. Due to wartime shipping shortages, the ship was pressed into service as a New Zealand merchant vessel, mainly carrying wool and tallow to San Francisco and Vancouver. The ship was managed by the Union Steam Ship Company.

When Pamir sailed into Wellington in 1941, she had no radio equipment installed. After being seized as a war prize, the Union Steamship Company installed radio equipment, which was used during the ten voyages under the NZ ensign.

A few years ago I had the great privilege to meet and talk with Neville Lobb, who was the last surviving R/O from Pamir. Neville told me that the receivers were AWA and the transmitter was a quarter-watt spark transmitter. At one stage USSCo installed an up-do-date Marconi Marine receiver. I’ve never been able to ascertain what model this was, but I believe it was removed when Pamir was handed back to its previous owners.

Radio Officer Arthur Stanton of Auckland sailed on Pamir under the New Zealand flag from October 1947 to October 1948 – a circumnavigation from Wellington to London and Antwerp. His comments are in the following article.

(We are indebted to Mr JA Johnstone of East Ham Depot far the following interesting notes.)

She was provisioned and stored for her long voyage and an additional wireless transmitter was fitted, a 200 watt transmitter covering the short waves from six to sixteen megacycles.

We were called upon to service her wireless equipment. The main set is an AWA 250 watt transmitter, covering medium wave telegraphy and ‘trawler’ band telephony. On the latter they had managed to communicate with coast stations up to 300 miles, but on the short wave transmitter daily communication was effected with New Zealand until the vessel arrived in London.

Power for both transmitters is derived from a bank of sixty 2 volt 180ahc accumulators charged by a diesel-driven generator which is run from 5pm till 10pm nightly.

The main aerial is suspended between the main and jigger mast approximately 200 feet above water line. When we asked the Radio Officer, Stanton, if he had experienced any difficulty in obtaining the necessary metre-amps during Government survey, he answered, quite seriously, ‘No’.

Accommodation on the Pamir compares quite favourably with that of most modern steamships, although it has been altered very little since the ship was built. Electric light is provided by a small diesel driven 110V generator, but the only heating is supplied by small individual kerosene stoves.

The wireless cabin and adjoining Radio Officers Room have been constructed in what was originally the Officers’ mess room, all Officers now dining in Captain’s saloon.

When we enquired of Radio Officer Stanton how he considered the Pamir compared with the steamers he had noticed very little difference; the ship was very steady at sea and did not roll so much as some steamships. The outstanding disadvantages were the kerosene stoves and the absence of hot and cold running water, in fact, the lack of any running water.

He stressed the greater necessity for wireless weather reports, more vital to a sailing ship than to a steamer. He had received several hundred weather reports during the voyage, and from this information it was possible to take every advantage of the prevailing winds, and to make a good passage to England.

Video: Crew preparing Pamir for the return trip from London to New Zealand, 1948

The sinking of Pamir