“Kawatiri was one of the ‘slow-greens’ – her usual cargo was coal and she often sailed from the West Coast of the South Island to Auckland.”
– David Smith

“The last of a series of six colliers which had increased scantlings, larger than usual rudders and belting which extended around the stern. The ships berthed head up the river at Greymouth and Westport and used a swinging wire [which] when sailing was made fast around the stern to the off side. The swift river current would swing the bow around and when the ship was pointing downstream the wire would be let go, which at times was a dangerous operation.”
– NZ Ship and Marine Society 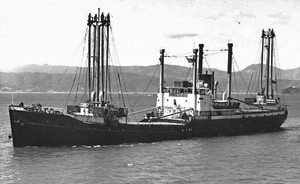