The John Wilson was a newly built bulk cement carrier when I joined her on 13th April 1961. She was only NRT of 691 tons, diesel-electric powered by three ex WW2 diesel engines – used for powering searchlights I was told.

She had a low powered HF phone transmitter but no 500kc/s facility. Hence the installation of a MF transmitter feeding a loaded whip to be allowed to voyage to New Zealand. I was allocated the ‘Owner’s cabin” which was quite comfortable for a smallish ship.

A few days out of Leith in Scotland the whip parted company with the ship so we made another. It was great fun at times getting QSPs in mid ocean as you can imagine on 500kc/s.

More fun when we had a lot of questions a day out from the Panama canal. We were blissfully unaware that a tanker of the same name was already in the canal coming through from the Pacific!

Crossing the Pacific was very pleasant. We spent about a week tied up just astern of the good ship HMS Bounty whilst the film Mutiny on the Bounty was being shot. The crew was employed tidying up the paintwork on John Wilson.

I could hear Auckland Radio ZLD a few days out of Tahiti and managed after dark to work ZLD for a few days before we berthed in Auckland. 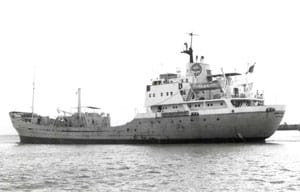