The vessel was launched in 1883 at Harland and Wolff in Belfast as the 4-masted ship Lord Wolseley.

In 1898, she was sold to a German ship company, re rigged as a barque and renamed Columbia.

In 1903, she was dismasted off Cape Flattery, and sold to a Vancouver company, who changed her name back to Lord Wolseley.

Just three years later, she was sold to another Vancouver owner, renamed Everett G Griggs and converted to a 6-masted barquentine.

Purchased by Captain Sterling in 1910 and again renamed, ER Sterling carried general cargo and timber between the USA, New Zealand, Australia and Britain.

She was equipped with wireless (note the spreaders for the aerial at the top of each mast in the photo above) and maintained regular contact with New Zealand coast radio stations.

The berthing of the six-masted barquentine ER Stirling at the Central wharf at Auckland last week aroused more than usual interest, for the vessel is probably one of the largest of her class afloat. Launched from the docks of Messrs Harland and Wolff, Belfast, in 1883, she has had a long career, during which her appellation has changed on three occasions. She was baptised the Lord Woseley, later changed to Everett Griggs, while she now bears the name of her owner, ER Stirling. The latter purchased her some nine years ago, and she has since been employed in regular service between San Francisco, Australia and South America, with general cargo and lumber. The vessel loaded a cargo of over 4,000 tons of coal at Newcastle after discharging her last general cargo at Sydney, and sailed for Auckland on July 25, and accomplished the trip across the Tasman in 25 days.

The barquentine is over 300 ft long, and has a lumber capacity of two and a half-million feet and a deadweight capacity of 4,300 tons. Captain RM Stirling, the son of the owner, is in charge, and has his craft fitted out with every convenience. There is a luxurious saloon, while the vessel’s own wireless installation keeps her in touch with the outside world when at sea. Safely stowed away for use in ports is the owner’s motor car, which must surely have some record for mileage.

The latest exploit of the ER Stirling rather disproves the prevailing opinion of the day that vessels of this class are obsolete, for it is understood that on her present trip she has cleared about £B,OOO in freight for her owner, at the rate of about £2 per ton. With all sails set in it is estimated that the large ship carries about 5,000 square feet of canvas, which, judging from the photographs showing her thus rigged, makes a most unique sight.

Otago Witness, 20 Jan 1920, p41
Two exceptionally large timber cargoes are in movement, or in active preparation for movement, between New Zealand and Australia. The six-masted barquentine ER Stirling, now loading at Auckland, is taking a cargo of 2,000,000 superficial feet of timber {mostly white pine) for the boxmaking industry in Australia. The steamer Admiral Codrington, now the property of the Poverty Bay Farmers’ Freezing Company, is on her way from Bunbury (WA) with a cargo of hardwood timber, approximating three and a-half million feet, for the Railway Department.

The Auckland Anniversary Regatta to celebrate the 80th Anniversary of New Zealand being proclaimed a British Possession was held on Thursday last. The weather was beautifully fine, and thousands of people enjoyed the pleasures of boating. A very powerful committee, piloted by Chairman AG Lunn and Secretary Ross, had most complete arrangements for Auckland’s great aquatic event. The fine big six-masted barquentine, “ER Stirling” made an ideal flagship, and from her roomy decks and all points of vantage around the harbour thousands of spectators witnessed the racing. During the afternoon the chairman, Mr AG Lunn, on behalf of the committee, presented the owner and master of the “ER Stirling” with an enlarged photograph of his vessel that had been taken that morning…

ROUND THE WORLD.
SHIPPING BREVITIES. GOSSIP OF THE PORTS

ER Stirling. — This well known American six-masted barquentine was totally dismasted in a Pampero, off Monte Video while on a voyage from Australia to London with wheat. The owner, Captain ER Stirling (very well known in Auckland) has found it impossible to get new spars for his vessel in any South American port, therefore, he has offered the vessel for sale as a hulk. The ER Stirling’s cargo was transhipped and taken home in a tramp steamer.

LONDON, 31st January. A thrilling epic of the sea was revealed on the arrival at Victoria Docks, Thames, under tow, of the famous sailer ER Stirling, over nine months after her departure from Adelaide with 50,000 tons of wheat. Such an adventurous voyage had not befallen her in all the years she sailed the Southern seas. Rounding Cape Horn, nothing worse than icebergs were experienced; but three hundred miles north-east of Falkland Islands a terrific tropical hurricane ripped out the mizzen and driver masts, killing the chief mate. Steps taken to repair one and carry on were successful, despite the raging seas, but a month later, slowly progressing, the already crippled vessel encountered another hurricane and three masts were ripped out, lifeboats stove in, bulwarks damaged and the wireless aerial blown away.

The captain of the ER Stirling agrees that it was the most thrilling experience in his lifetime. 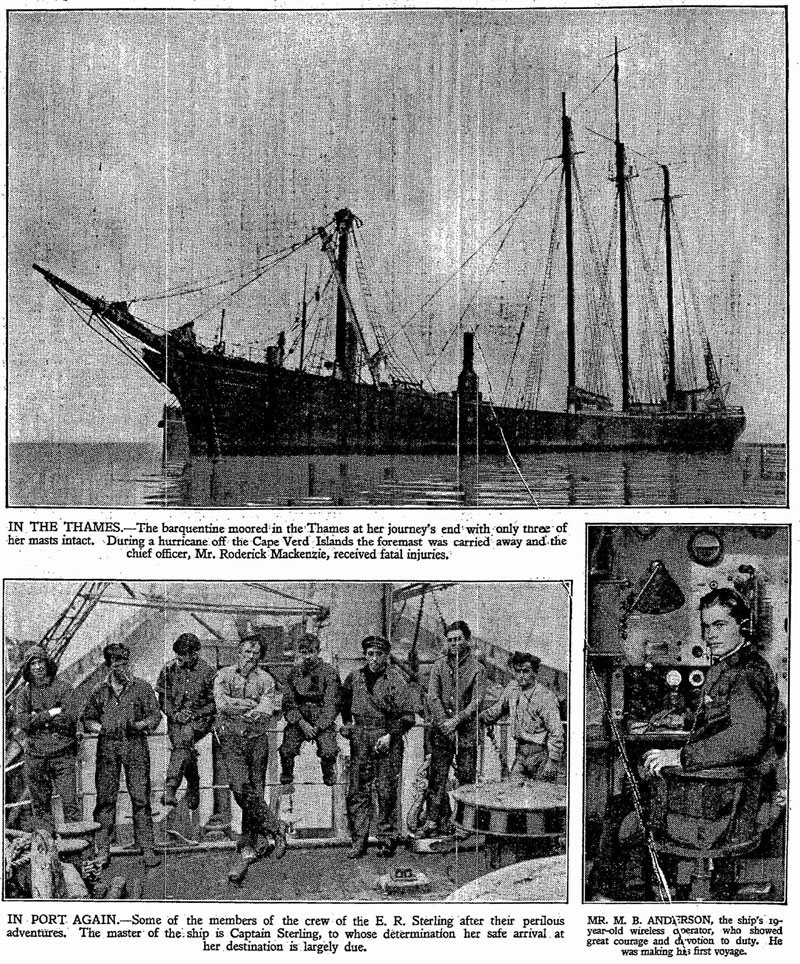 An interesting arrival in the Wear is the sailing ship ER Stirling, which is to be broken up after an adventurous career of 45 years. The last voyage of the vessel from Australia lasted eleven months, and she was towed the last 4000 miles to London. She carries 68OO sq. ft. of canvas, is 308 ft long with 42ft beam, and 25ft depth. She has a capacity of 4000 tons deadweight and was built in 1883 by Messrs. Harland and Wolff. Captain Sterling, her owner and commander, remarked after his vessel was at rest in the North Dock, that during the war he could have sold her for £100,000, but now he could not give her to anyone to pay the bills.