There was an excellent turnout of 22 brass pounders, with good signals on a reasonably quiet band. How great to hear so much CW! Logs were received from 17 stations.

Another very pleasing aspect of this SKN was the quality of sending. I found everyone quite easy to copy, and others apparently felt the same way, as there were very few nominations for the Best Fist Award, and no clear consensus among the nominations received.

Because of this, there will be no Best Fist award this time.

“You will see that I have noted Armchair Copy against four of the QSOs. That is because their sending was so nicely spaced, I could sit back and relax and type what they wrote without having to wonder if I had to translate it later!

“I cannot vote one of those as Fist of the Evening as all four were excellent senders. What I can say is that the sending by straight key by ZL stations over the 11 years I have lived here has improved tremendously.”

As you can see from the scores, this is rather awkward for your SKN manager. I was shocked to end up with the highest score, considering I was using a 60-year-old, 3-valve transmitter, and an even older receiver. Because I was crystal-controlled, I just sat on the same frequency for the whole hour, unable to chase stations. In case anyone is suspicious (and you have every right to be!) here’s my log.

My theory is that each station decided to give me a contact so I wouldn’t feel too bad. Well, thanks for being such a great bunch of ops and it was certainly fun to be kept busy making QSOs.

You now have six months to get ready for the next SKN, on the first Sunday in December, at which time I expect people won’t be so nice to me!

Conditions were good, l know there were one or two missing. However, if a few more do come on, may have to go 2 hours yet? This would especially useful or advantageous if operating separate VFO on TX/RX. Otherwise very enjoyable
– ZL1BWG

Hard work using a straight key after being lazy using a bug! Thanks for promoting this, and good to see it receiving good support.
– ZL2AGY

Not a good score for me, I am afraid, but good fun, despite some terrible mental blanks on my part, and having to copy through the QRM of some idiot tuning up ad nauseam right on top of me towards the end of the hour.
– ZL2AUA

Interesting how an apparently dead band can transform into such life for an hour! Thanks for organising SKN. It couldn’t have been done better and was thoroughly enjoyed.
– ZL2AVM

Once again I thoroughly enjoyed the hour of SKN. Nice leisurely straight key work from the other stations. My random wire antenna is the best I can do with the small space available for a 80m antenna. I feed it against an earth spike and one radial which is attached to the wooden fence about 500mm off the ground.
– ZL2AIM

I got off to a shaky start with two power cuts in the first few minutes of the contest. However, things settled down and we got down to business. Conditions were good and nearly all signals were 599. Operating conditions were down to 6C in the shack so I was well rugged up. Thanks for running SKN again Neil. Most enjoyable.
– ZL2GD

Will be near the bottom of the results list, but nice to have another opportunity to improve my CW skills. Might have missed the odd detail, but got most of it ok.
– ZL2GVA

Many thanks for organising a great show.
– ZL2WT

I have a tradition of using a different key for each SKN, so congratulations to everyone who correctly copied “Wigram” key. This key was made by an unknown Air Force trainee at Wigram during World War 2.

According to ZL2WT, who has done some research on these keys, they were made as training projects because the British Elliott Brothers keys normally used by the Royal New Zealand Air Force were not available. My Wigram key was in a box of junk I was given, and I finished restoring it just a few hours before the start of SKN. It uses lots of steel, including the base, although the trunninon block and some hardware are brass.

The transmitter this time was a late 1950s Johnson Viking Adventurer, crystal-controlled on 3.514.9 kHz. These rigs were designed for US novice-class licensees and were available as kits or fully wired. They use three valves, including an 807 final.

The receiver was a 1955 Collins 75A-4 and the antenna was an 80-metre doublet fed via a Johnson Matchbox.

Update: SKN makes the cover of Break In 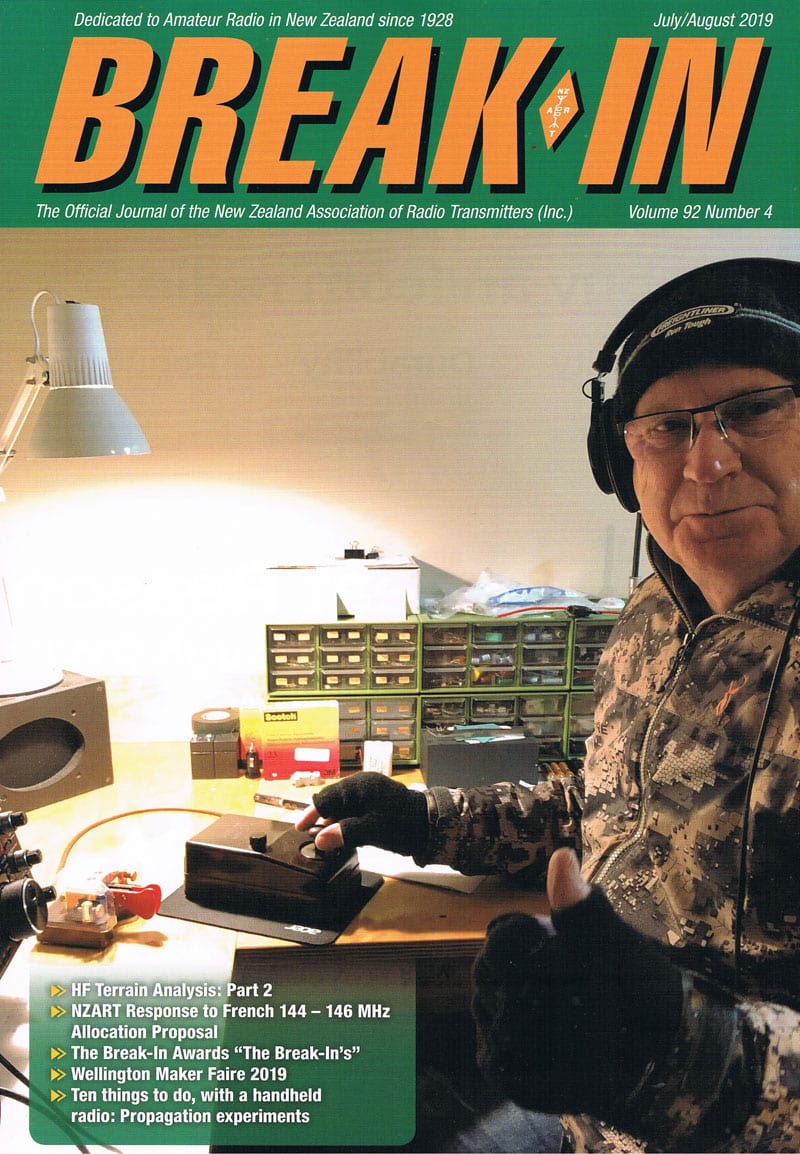