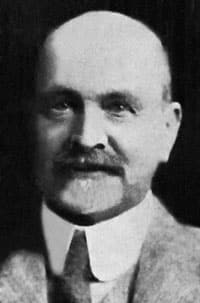 1857: Born in Aberdeen, Scotland
1862: Immigrated to New Zealand with his parents
1874: Joined NZ P&T as a cadet in January. Later that year, at just 16 years of age, he was given charge of the Hawera station.
1877: Transferred to Construction Branch, Wellington, then became acting sub-inspector of telegraphs for Wellington district, and later sub-inspector of telegraphs for Auckland district
1894: Promoted to Inspector of Telegraphs, Dunedin
1911: Promoted to Chief Telegraph Engineer at Wellington on 10 January
1918: Retired from NZ P&T on 31 March
1929: Died at his residence, Muritai, on 18 June, aged 73

He surveyed the sites for Awanui Radio and Awarua Radio around 1910 and in 1913 was responsible for arranging the handing over of both of these high-power stations from the builders, Australasian Wireless Company, to the NZ P&T Department.

Joseph Orchiston died on 18 June 1929 at his residence at Muritai, in the Eastbourne area of Wellington. He was aged 72.

His wide circle of friends will learn with regret of the death at his residence, Muritai, of Mr Joseph Orchiston, in his 73rd year.

The late Mr Orchiston was born in Scotland in 1857 and spent his boyhood in the Clutha district, his parents having settled there after their arrival in the colony in 1862. In 1874, when 16 years of age, he was appointed to a cadetship in the Post and Telegraph Department, and after passing through the learners’ gallery in Wellington, he was appointed postmaster at Hawera, being even then less than 17 years of age.

Hawera at that time consisted of about 33 houses, with a blockhouse in the centre of the settlement, garrisoned by Armed Constabulary, for the Maori War was not long ended. After being stationed in that town for three and a half years, young Orchiston was called to the head office in Wellington. There, under Dr Lemon, he began work in the construction and maintenance branch of the Department. After a short period he was given charge of all the construction work in the Wellington provincial district, being promoted to acting sub-inspector at the age of 21, and sub-inspector at 23, when he succeeded Mr Alfred Sheath in the charge of the Auckland district. After 14 years’ service there, Mr Orchiston was transferred to the control of the Otago district. On 10th January, 1911, he was appointed as Engineer-in-Chief of the Department at Wellington, and occupied that position until bis retirement from the service on superannuation on 31st March, 1918.

Mr Orchiston saw the Post and Telegraph Department grow out of all recognition during his service. When he first joined there were only ninety-three offices in the Department in the whole of New Zealand, a figure now eclipsed by some of the small subdivisions of the Dominion. There were no telephones in the ninety-three offices in New Zealand in 1874. The telephone had not then been invented. When the news of its invention was first heard in New Zealand the telegraph offices were inclined to look on it as a Yankee yarn, for with the limited knowledge they had of the experiment then attracting much attention everywhere they could not see how certain vital difficulties had been overcome. Mr Orchiston had been in the service three years when the invention was announced and a few years later he fitted up the first Auckland telephone exchange. That was 1881, and the Auckland and Christchurch exchanges were the first to be opened in New Zealand, Christchurch having the honour of leading by about a week.

Mr Orchiston was known throughout his career as a Government officer of the highest integrity who was always alive to the need for the greatest efficiency. Of a genial and kindly disposition, he was held in affectionate regard by the older officers of the Post and Telegraph service throughout New Zealand with whom he was associated, as well as among a much wider circle with whom his various official positions brought him in contact.

Mr Orchiston was for many years local honorary secretary of the Institution of Electrical Engineers, and took a lively interest in all matters connected with electrical development in New Zealand. He was from the early days keenly interested in the development of the hydro-electric powers of New Zealand and was one of the pioneers who foresaw its possibilities. He contributed many articles in the Press pointing out the wonderful potentialities of New Zealand in this direction.