Military service: Embarked Oct 1915 for Egypt with rank of Corporal in the Otago Infantry Battalion. Returned as 2nd Lieutenant in 1918. 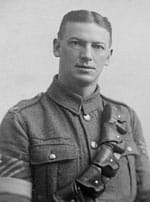 The Star, 6 July 1918, p 8
Mrs Willis, of 4-2, Straven Street, Riccarton, has received a cable message from her son, Lieutenant ALM Willis (Military Medal), that he is returning home, after being in hospital in England, Lieutenant Willis left with the Seventh Reinforcements and saw service in Egypt and France. Before enlisting he was on the staff of the wireless station at Awarua.

Mr Willis started his career as a telegraph messenger at Culverden in 1904. Since then he has been stationed at 19 different offices, at one time being a telegraph cadet at Christchurch. For several years he was in the radio section of the engineering branch, being in charge of Awarua, Chatham Islands, Rarotonga, and Wellington radio stations.

Mr Willis saw nearly four years’ service in the last war, and was awarded the Military Medal and later commissioned. He intends to live in Christchurch.