During the Festive Season of 1952-1953, most of the construction company people were absent from the Sound and only a skeleton crew stayed behind. Probably no more than 15 in all, including myself and the Tourist Department people, were in the Sound for the Christmas and New Year celebrations.

By this time Barney Gilligan was providing a regular once a week freight service into the Sound. We knew that the last December truck would be about a week before Christmas. It was decided by popular vote that Sparks should use his brewery connection to ensure that two 5-gallon kegs of ale would be on that vehicle. This was arranged.

On arrival it was decided that one keg would be tested; it was and the contents were perfect. It was a thorough test and the keg was dry when the test was complete.

On the festive day the second keg was opened. It was flat. However needs must, we steeled ourselves and persevered, discovering that by the third glass the state of the ale was a little irrelevant. Valuable knowledge when one is in remote places.

Shortly after the New Year, the construction of the new Hotel began in earnest. Noting my previous comment about the “H” layout of the old hotel, the right hand arm stands untouched at the top of the photograph above. The connecting arm with the dining room, kitchen buildings, etc., is the area above and left of the dark roofed Z-shaped construction.

The large-roofed building against the left edge of the photograph was (when the old hotel was open) the female staff accommodation and the huts clustered in the top left hand corner are where most of the male staff resided. The large structure extending downwards in the middle of the photograph is the new 2-storied guest block with the new lounges, etc., extending to its top right.

The small building at the bottom of the photograph is the Post Office.

My quiet life changed immediately. I was directed to have the Post Office open for the regular hours of all Post Offices. The regular weekly visits to the Homer Tunnel to receive/despatch mail ceased once Gilligan started his weekly freight service and the main mail structure was built around his timetable. In addition, mail could now arrive by aircraft from Queenstown at irregular times. I would always open the Post Office for mail at these times regardless of whether the hours were regular or not.

I did not deliver mail but held it at the Post Office for addressees to collect at their leisure. Also the workers’ visits to the Post Office had to be made at times when their employment allowed; and these were not always in sympathy with Post Office requirements. This caused some problems with the Chief Postmasters Office in Invercargill which could not at first understand why I persisted in operating an “open at all hours [but not always the same]” regime. When there no complaints, however, the CPO came to accept the situation.

I have previously mentioned that the Post Office had a connection with the contractor’s pay system. The contractor did not want to have large sums of money in transit from their office in Westport to the workers in Milford Sound. The nearest commercial bank in those days was at Lumsden, 193km away. The solution was for the Post Office Savings Bank to issue each employee a special Post Office Savings Bank Account Number and the company would deposit to the employees account the monies due. I would get a copy of the amount and would update the ledger figures.

The Post Office and the Company shook hands and probably had a beer on a satisfactory outcome. They were happy. However the account holders were not so pleased; while there were no shops in the Sound where you could spend money, there was the inevitable Poker School, etc., where a bit of the necessary was the ticket to join and not always did the local Post Office have that cash. I was the meat in the sandwich and I wasn’t happy either.

Like all Post Offices the Milford Sound PO had a cash limit which was on no account to be exceeded. If the daily balance exceeded that figure then excess was then and there put into into a sealed envelope and into the office safe awaiting the next remittance (mail day) to Head Office. The not-to-exceed figure at Milford Sound at that time was £5 ($10) – quite ridiculous in a camp where the majority of the workers were getting paid more than double the normal rates.

I pointed this out to the Chief Postmaster. His answer (after consulting, of course, with Head Office) was to increase the cash limit to £25 and to issue the office with a Post Office cheque book so I could issue cheques. The limit for each cheque was £100.

This made things a lot better and worked quite well until the time arose when I had to issue a cheque. I had never had a personal cheque account and knew very little about how they were used. My customer wanted £100 as he was off up north to enjoy himself. He also knew nothing about cheques.

At first he was reluctant to take a cheque, fearing that he might lose it and then where would he be? I read the instructions and then told told him I would cross the cheque, make it payable to him only and if the cheque was lost it would be useless to anyone else. Not exactly happy, he accepted it and away he went.

When he returned to Milford Sound he told me that I was lucky to be absent when he produced his cheque in Gore and asked for cash. It was explained to him that he could not have cash and the cheque could only be lodged as a credit to his account. They would be glad to do it but he would have to wait until the cheque was cleared before he could get any cash and that would take a few days.

He probably said something like “get stuffed” and rang his boss who arranged for him to get £100 in cash and settle it up when he got back to the Sound. He was quite happy then but said “I could have killed you in Gore.” He was a big fellow too.

Like the men working on the tunnel and on the road, many of the tradespeople employed by the contractor had interesting backgrounds. Almost all of the working people in the area were paid “country rates”, given that name by the powerful unions of the day who allowed some of their members to be on better rates of pay than their town/city cousins so as to attract people to work in remote areas rather than allowing employers to hire foreigners to do the work.

Many of those who took up country work did so for other reasons than pay and not a few of them were born outside New Zealand. There were people trying to “dry” out, far away from the pubs. I was told of one tunnel worker who could recite, without error, a number of Shakespeare’s plays. I knew of an ex-doctor who worked in the area as a labourer because he could not face any more the tragedies of medicine. The reasons were many and not all “escapism”. I totally enjoyed my life with these people and learned so much from them. 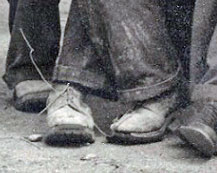 The fellow on the right in the photo above was a well-known New Zealand photographer and author. The chap with the beard and the pipe had worked as a seaman on the barque Pamir when Arthur Stanton was the Radio Officer. Look closely at his boots; yes that is No 8 wire he is using as laces. He could tell a great yarn.

Many of the people were “Coasters” as one might expect. Almost to a man they had a slightly different outlook on life than those of us from across the Alps. They played with passion an Irish ‘trick’ taking card game called “Fortyfives”. Put cotton wool in your ears if you ever get close to a “school.” For the record, the lady on my knee is the wife of one of the senior company employees.

On the non-working days, fishing, tramping and, in the winter, ski field jaunts all were very popular.

The quiet Sound had become the noisy Sound; but with the noise came activity. The days at the Post Office were busy and I was never bored. The nature of a construction site was such that there were always visitors in the Sound and a large part of my work was date-stamping self-addressed letters with the Milford Sound postmark. The evenings were generally quiet on most days; the exception being the permanent Poker school. Few nights would pass without that activity.

On the weekends there would be a film on Saturday nights and the Company would shout the workers collectively a full keg. Not all would find joy in the latter but those that did ensured there was an empty keg to be refilled for next weekend. I was accepted as an “honorary” worker for those nights.

The construction work continued throughout the year and shortly after the tunnel work recommenced in the spring of 1953 the blasting work was completed, the road alterations were complete and the tunnel could be used by a limited number of vehicles.

There began another shift in the work of the Milford Sound Post Office. While the building of the new hotel would not be finished for some months, tourist activities would increasingly take up more of my time. More about that in due course.

Clyde Williams was radio operator and postmaster at Milford Sound, 1952-1954.