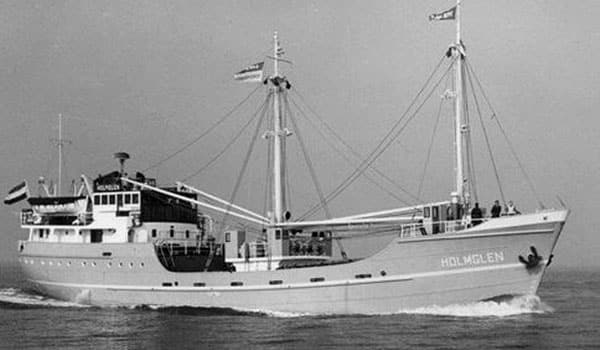 The 464-ton coastal freighter MV Holmglen sank in a storm off Timaru on 24 November 1959. All fifteen crew died, although only three bodies were recovered.

The ship was only three years old and a court of inquiry could find no explanation for the sinking.

Holmglen left Oamaru on 23 November bound for Wanganui via Wellington under the command of Captain Edward Joseph Eugene Regnaud.

At around 9.15pm on 24 November a mayday message from Holmglen was received by the Taiaroa Head Signal and Radio Station and also by Awarua Radio ZLB and Wellington Radio ZLW on 2182kHz. A voice, believed to be that of the captain, gave the ship’s position as 44° 35′ South, 171° 37′ East, and reported: “am heeling heavily to port … accommodation awash … preparing to launch boat.”

The map shows the position given in the Mayday message. The final resting place of Holmglen is 6-7 miles northeast of this position and 22 miles east-southeast of Timaru. Taiaroa Head, where the distress message was received, is 20km northeast of Dunedin.

The message was acknowledged by Taiaroa and answered by Holmglen who said to stand by for further information, but this was the last communication from the ship.

A sea and air search was conducted and the wreck of Holmglen was found by another Holm Shipping Company vessel, MV Holmburn. After the crew of Holmburn spotted an oil slick, they used sonar to locate the exact position, which was later confirmed by the Royal New Zealand Navy using underwater video and divers. Holmglen lies intact and upright, in 30 fathoms of water about 22 miles southeast of Timaru.

“I was on watch at ZLW when the distress call was put out. It was a MAYDAY call on 2182Khz. Peter Dunn was the operator on that frequency when the call came. I am not too sure of the time – I think it was mid evening. I was on 500kHz at the time and for the first and only time I found myself repeating an SOS call on that frequency. I can recall that I was very nervous and the sending of the “T” character to set off the Distress Call Alarms seemed to take an age; as did the (2 min?) wait before repeating the distress call, which was sent at 12 words a minute – and that was terribly difficult – which seemed to go on forever. I do not think I will ever forget it.”
– Clyde Williams

More on the wreck of MV Holmglen