On 13 June 1968, the Northern Steam Ship Company’s 739-ton coaster Maranui sank east of Coromandel Peninsula when her cargo of bulk wheat shifted during a severe storm.

Maranui, callsign ZMLA, had been launched in 1953 at the Jac. Bodewes Scheepswerven yard in the Netherlands.

Purpose-built for the Northern Steam Ship Company, Maranui was not particularly well-suited to bulk cargo. It was not possible to completely fill her single hold up to the deckhead and, as a small coastal vessel, she was not required to divide her cargo with shifting boards.

Fully loaded with 900 tons of wheat, Maranui was on her way from Lyttelton to Auckland when she ran into heavy weather.

At 11.25 am, Maranui was laid over by a particularly large sea, and the cargo shifted, giving the ship an estimated list of 10 degrees to port. Over the following hours, the list increased as seas flooded into port-side ballast tanks through vent pipes which had been left uncapped.

Several other factors probably contributed to the loss of Maranui, and these are described well in Murray Robinson’s article, the Maranui Tragedy of 1968. 1

As a coastal vessel, Maranui was not required to carry a radio officer. The master, chief and second officers held qualifications as radiotelephone operators, however. 2

At 3.40 pm, Captain Bruce advised the Northern Steam Ship Company by radio that Maranui was

“…STEERING VERY BADLY IN EASTERLY STORM. MAY HAVE TO HEAVE-TO. WILL ADVISE.” 3

Captain Bruce hove-to, with Maranui‘s bow pointed east, into seas that were by then flooding into the fo’c’s’le through an open door. Crew were sent forward but could not secure the door which appeared to have a broken hinge.

The ship’s list quickly increased to around 40 degrees, and at 4.05 pm the master ordered Chief Officer Ingham to send a PAN (Urgency) message to Auckland Radio ZLD:

APPROXIMATELY 25 MILES EAST OF MERCURY ISLAND. ARE THERE ANY VESSELS IN VICINITY? LIST IS INCREASING. 4

Realising the ship was close to capsizing, another call was made to ZLD at 5.03 pm:

CLEARING LIFEBOATS AND LIFERAFTS NOW IN CASE THEY ARE NEEDED. 6

On his radar, Captain Bruce could see another ship about eight miles away. At 5.17 pm he asked ZLD to contact the other vessel.

That ship was the 8160 GRT Swedish freighter Mirrabooka, bound for Auckland from Napier, under the command of Thorsten Wahlstedt.

The two vessels made radio contact and, guided by flares, Mirrabooka sighted Maranui at 5.55 pm.

At 6.15 pm, all 15 crew of Maranui took to the liferaft (the lifeboats could not be launched due to Maranui‘s 45-degree list).

In seas estimated at 30-40 feet, Captain Wahlstedt succeeded in bringing his ship alongside the liferaft, where six of the Maranui crew either climbed up nets or were pulled aboard the rolling freighter.

Then, the liferaft was swept away. Its position could be seen occasionally, thanks to a torch that 2nd Officer Taylor had grabbed just before abandoning Maranui. Captain Wahlstedt brought his ship alongside the liferaft an astonishing six times, and at one time four men were seen to be still inside. They were exhausted, however, and none of them made it to safety before the liferaft disappeared from view for the final time.

A few days later, the body of John Roberts was found near Sugarloaf Rocks.

No one saw Maranui go down, but she disappeared from Mirrabooka’s radar at 6.58 pm.

The crew who drowned were:

“Generally speaking, the Northern Steam Ship Company Ltd ran a good fleet of smart, well maintained vessels and had one of the longest maritime histories in New Zealand,” wrote journalist (and former deck officer) Roy Vaughan, who interviewed the Maranui survivors when they arrived in Auckland aboard Mirrabooka.

“The company had started at the bottom with frail tiny steamers far less seaworthy than the Maranui, but with the forecastle head door firmly shut and use of shifting boards to hold her bulk gain cargo I doubt the disaster would have occurred, especially if she had taken refuge at Napier or Gisborne to get her cargo trimmed and the list taken off. All too often, disaster is the consequence of several mishaps, or factors, all occurring at one time, anyone of which could have prevented the accident.” 8

The following radio logs from Auckland Radio ZLD were provided to the official enquiry into the sinking of MV Maranui ZMLA on 13 Aug 1968. 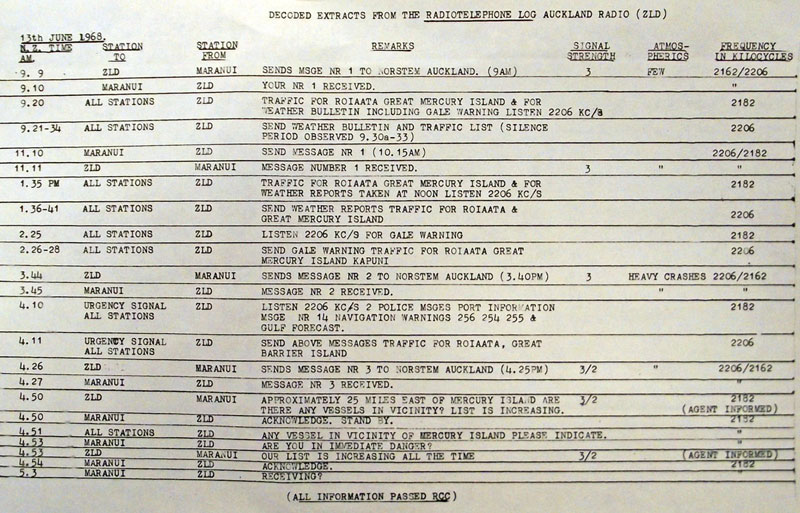 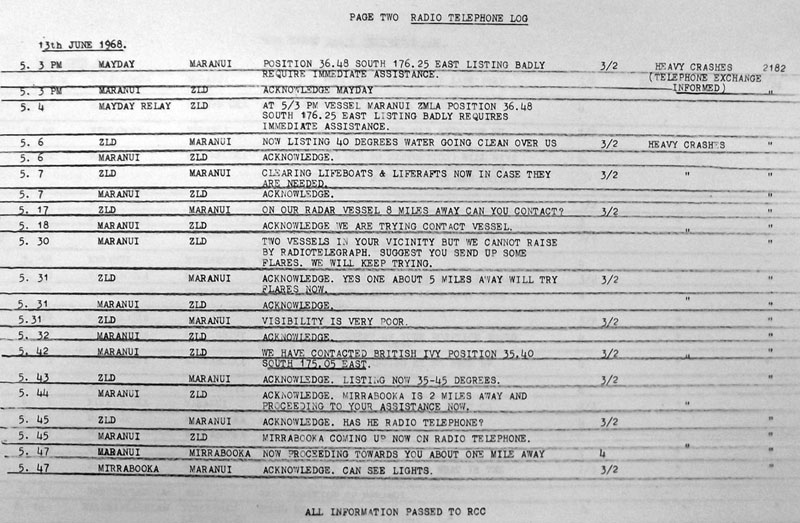 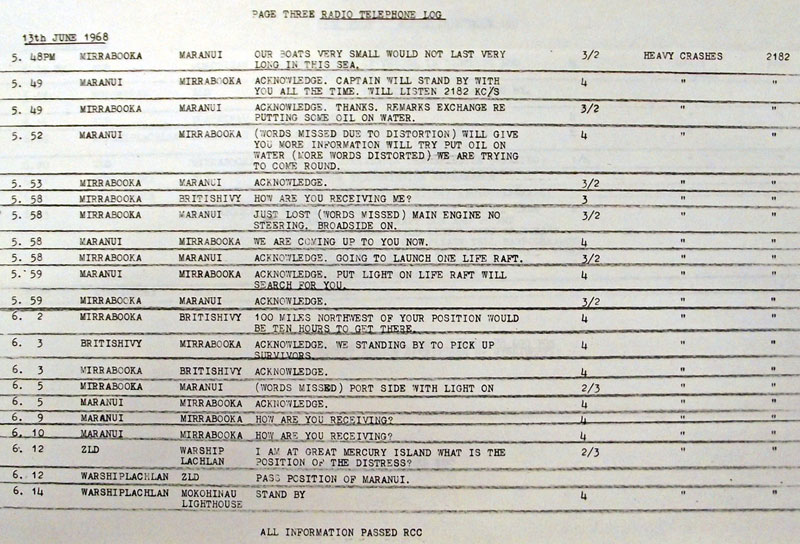 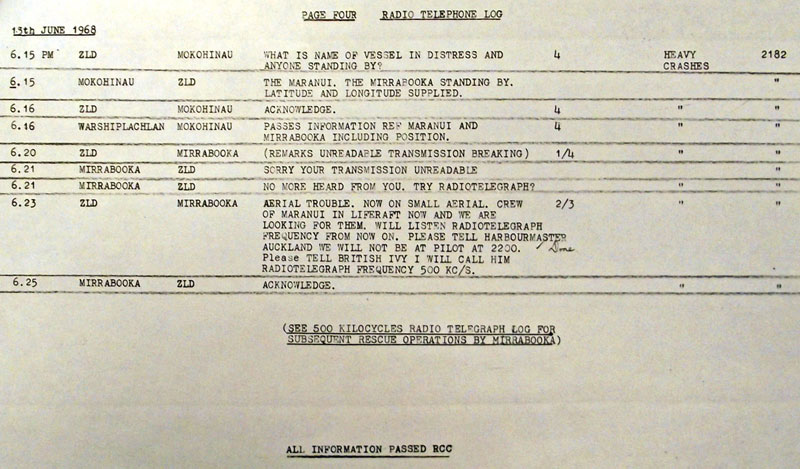 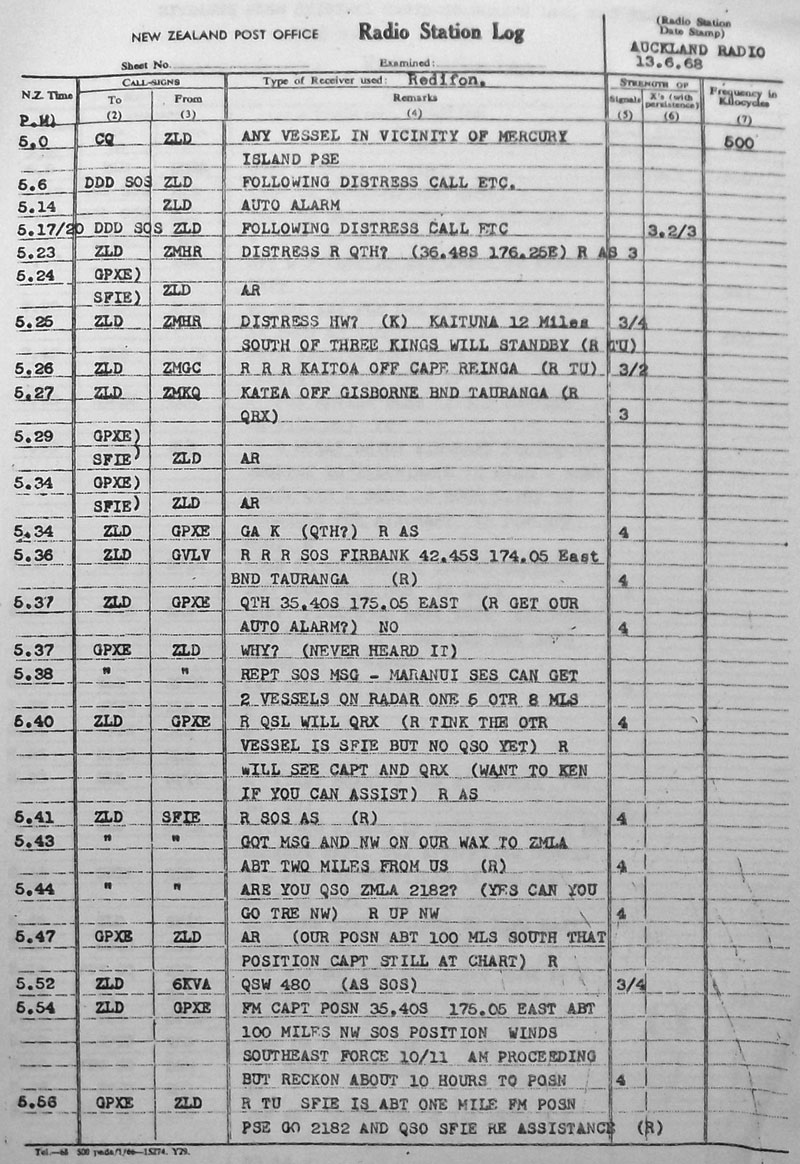 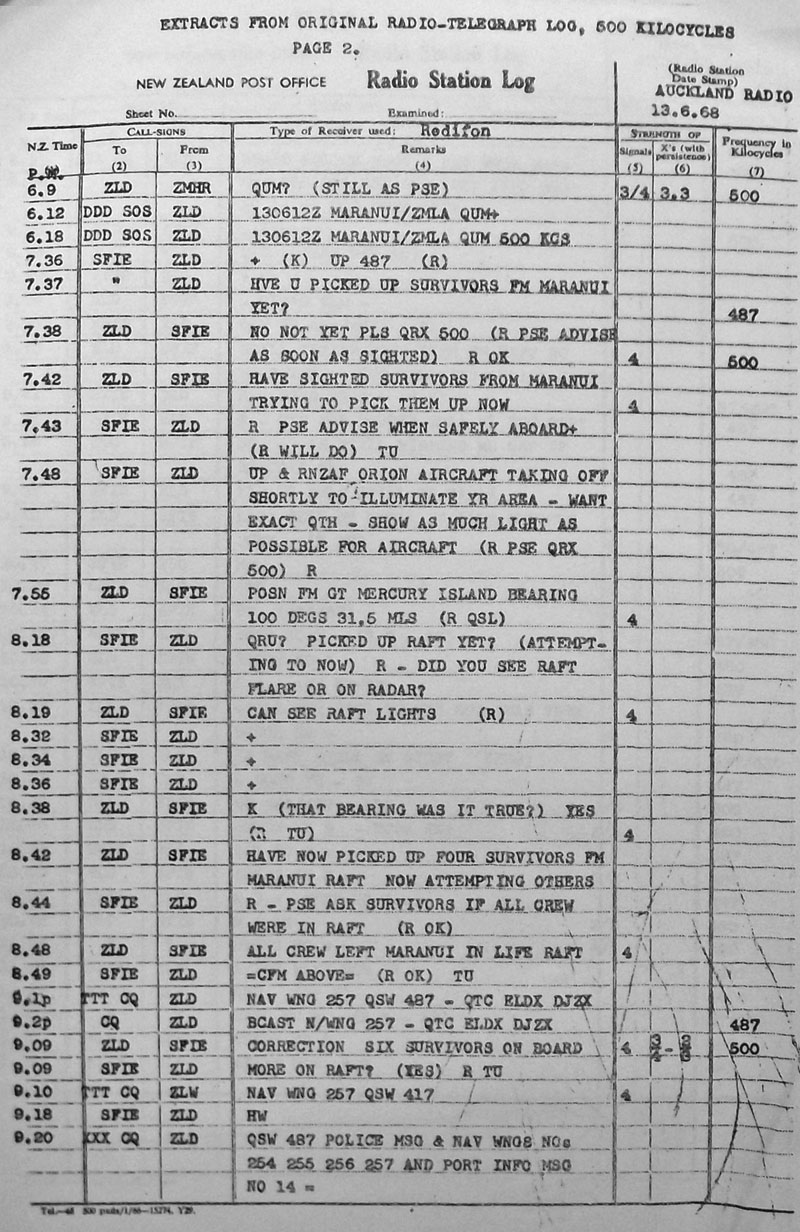 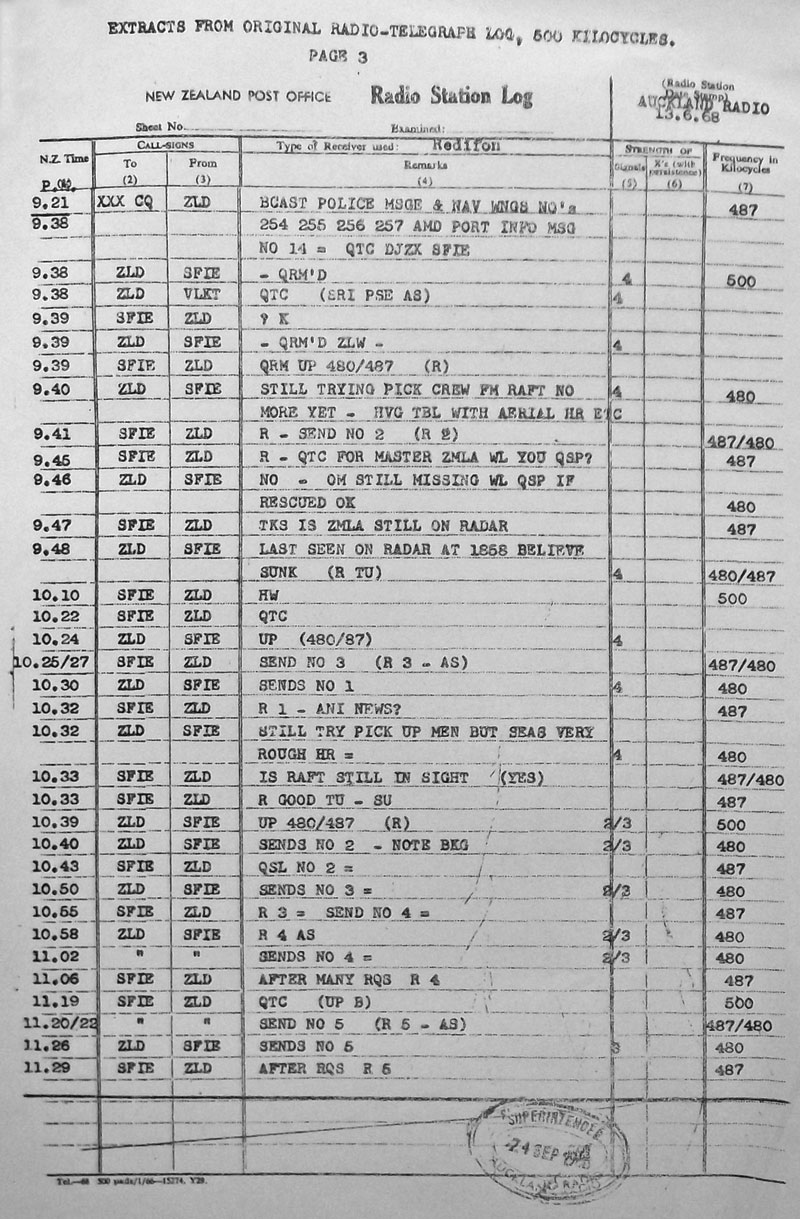 Thanks to historian Alex Glennie.