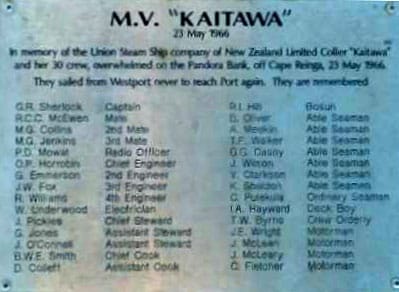 The memorial plaque pictured above appears to be a corrected version of this plaque, photographed in 2003 by Roger Wincer.

The 2003 plaque incorrectly states that 30 mariners were lost (the actual number was 29) and even lists 30 names, of which the third, “MG Collins”, appears to be a mistake.

Who was 2nd Mate MG Collins?

The official list of crew at the time of the sinking does not have MG Collins as 2nd Mate, but lists the 2nd Mate as MG Jenkins.

The original 2nd mate on this voyage, RP Oakton, was taken sick shortly after departure from Westport at 2245 hours on 20 May. Kaitawa returned the next day and put him ashore where he was hospitalised.

He was replaced as 2nd Mate by MG Jenkins who is listed on the memorial plaque at Westport as 3rd Mate.

It was common practice for the Union Steam Ship Company ships not to carry a 3rd Mate when on coastal trips.

The brother of Michael G Jenkins has confirmed to me that it was his brother who replaced Mr Oakton as 2nd Mate. So who was MG Collins?

At any rate, the plaque shown at the top of this page correctly lists MG Jenkins as 2nd Mate, with no 3rd Mate.