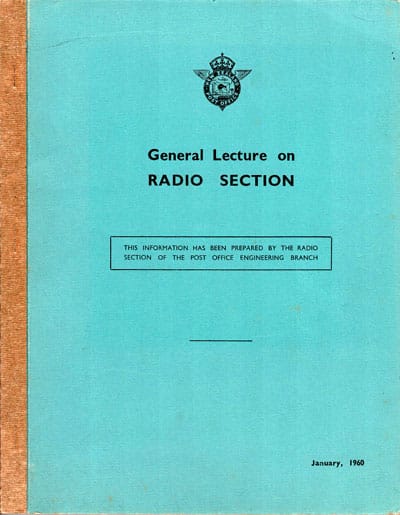 In 1960, Radio Section’s structure and responsibilities were described in the notes for a lecture on Radio Section as follows:

“The activities of the Radio Section are controlled by the Superintending Engineer (Radio) through the Divisional Engineer (Radio) who has direct supervision of the many and varied aspects of the Section’s engineering work.

“The work may be broadly divided into six groups:

Radio Division formed part of the Telecommunications Branch of the Director General’s Office of the NZPO and acted in an administration capacity with responsibility for the traffic aspects of all NZPO radio services (except toll services by radio).

After consultation with Radio Section it conducted negotiations with other Administrations, other Departments and outside organisations on the application of International and Dominion Radio Regulations.

In practice such dialogue was often initiated by Radio Section.

In the meantime Land Mobile stations such as Mt Eden in Auckland were growing rapidly.

A number of single channel “Country Sets” were also installed around the country. Normally, one end would be installed in a local exchange or Post Office and typically the remote end in a farm building sometimes, located off shore on an island.

These sets were made by companies such as STC and later by AWA NZ. The STC ones were built in a heavy cast aluminium case with weather seals. At the remote end they were often mounted at the base of the pole supporting the antenna. The AWA ones were a later design using transistors and were normally housed in a suitably waterproof farm building.

In later years these sets were often solar-powered using a deep-cycle battery, a simple charge controller and a 12-Volt photovoltaic module.

Sometimes the batteries had very short lives as desperate farmers finding the tractor’s battery flat would break in to the battery boxes to use the nice fully charged battery inside. The tractor may have got started but the deep-cycle battery not designed for such large current discharge and generally expired soon after. Next time they were in town, the farmer would report that their telephone no longer worked. 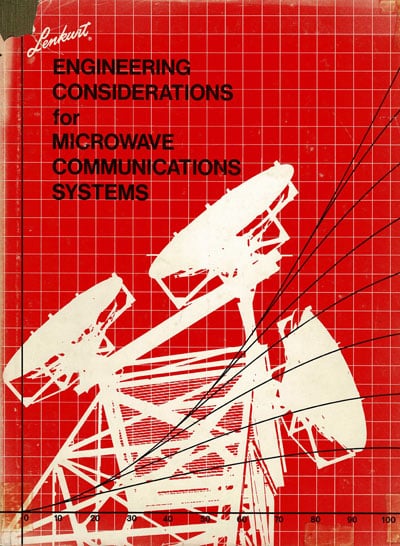 Manufactured in the USA, these were of a modular design and mostly transistorised apart from Klystron finals. Their engineering design book became the “Bible” for planning new microwave links.

Many of these new systems were being installed by late 1964, including one requiring the construction of a huge tower on the Airedale Street exchange building. This structure became the highest in Auckland at that time.

A spare Lenkurt bay was purchased and held in the Radio Instrument Lab on the 1st floor Wellington East PO, and was used for module repair and testing. However in late 1965 or early 1966 the bay was sent to the Hamilton Radio Depot where a Lenkurt 76A1 Training School was to be established and the bay could be used for both module repair work and training purposes.

My own connection with Radio Section started in 1965 when I was asked to go and pick up an instrument that had been repaired. At that time I had no idea who or what Radio Section was. I was employed in the Wellington District and was somewhat cautious of Radio Section or “The Castle” as it was it was referred to by my colleagues.

The Radio Section library was full of texts and reference books on radio, plus filing cabinets full of drawings of Post Office installations and equipment. The librarians were Roy Schdroski and George Askey, both retired Chief Technicians (Radio) and very valuable fonts of institutional knowledge and experience.

In the above photo you can see the glass-fronted cabinet containing various meters and variable attenuators. The door to the large walk-in vault where the most valuable test instruments were kept can also be seen.

The 4th floor of the Wellington East Post Office housed the Radio Workshop and Development Section. It was a highly productive place that designed and produced many items both large and small. One larger item that appears in many photos of Himatangi Radio is the Control Console which was designed and built on the 4th floor.

The end caps of the cavity filters pictured above were cast in brass and had to be turned to size on a lathe. Other components had to be fabricated, then soft silver plated.

The 4th Floor store kept a small supply of Invar rod for the main tuning adjustment. Invar rod has a zero coefficient of expansion and was used to ensure temperature changes did not affect the tuning of the filter.

The 4th Floor was a very interesting place to work, requiring mechanical workshop skills as well as electronic knowledge.

In earlier days, if something was required but couldn’t be easily sourced, then a way to make it would be found. When small runs of moulded plastic components were needed, for example, an injection moulding machine was designed and built.

We had moulds for making a number of different cable clamps, casting pots and other devices. The use of plastic clamps reduced the possibility of intermodulation at congested Land Mobile Base Stations. We also made the bases for small brushes used in rotary telephone exchanges, a commercial brush company loaded the bristles.

All photos courtesy Chris Underwood (except where noted).